Berries and cream, bread, and lard

Now.... which one of you was loud mouthin' on and on about peaches and Jersey cream??  Oh that's right... you know who you are. 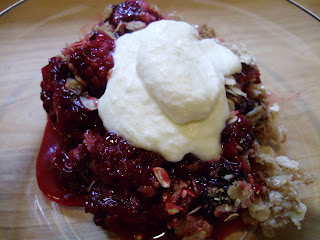 Back atcha with blackberry crisp and shaken-not-whipped Jersey cream... that's what I'm talking about. (BTW - tell Daisy that her best friend and true owner loves and misses her very much.)

We have buttermilk pie, berry crisp , 2 loaves of bread, and foccacia bread with fixin's from the garden: 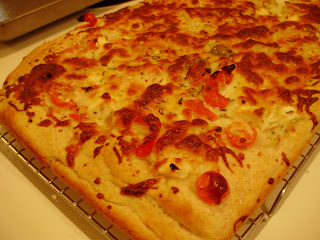 And I made some fresh goat cheese with fresh herbs. They'd better get here quick or we'll just start eating!

While I was making my pie crust I realized what a goof I was being. I keep the lard frozen and instead of fighting with it this time trying to cut it up.... I just shredded the frozen lard with my cheese grater. A great way to uniformly cut the lard and butter into the flour....and avoid a lard inflicted injury. 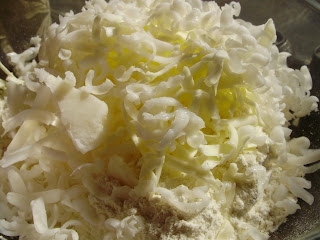 Now if I can get this kitchen cleaned up we'll be ready for company.

Happy visitin' everyone!
Posted by Ohiofarmgirl at 3:16 PM

Mmmmm - although it is a major sin to COOK any berry or peach during its season (preserving for later and cooking it then is fine). I've gotta try to make clotted cream sometime.
Daisey now spends half the milking time looking back at me thinking - "Where's that little dame with the light touch?" You can tell she's disgusted to still be here. Come get her.
:)

I finished shaking the cream and made butter to go with the bread. Its super!

OK, Mimi is going to get jealous if you keep making posts like this.

And are you kidding? Mimi is totally out of my baking league. I love what she cooks up - did you see her cheese loaves?
http://mimicooks.wordpress.com/2010/03/23/meet-the-next-5-pounds-you-will-add-to-your-hips/