Did everyone see that huge storm that careened across the Midwest yesterday?  They said on the news that if the storm had been over the ocean it would have been a named hurricane. All the weather guys were a-twitter because this storm had the second lowest barometric pressure on record. Wow! 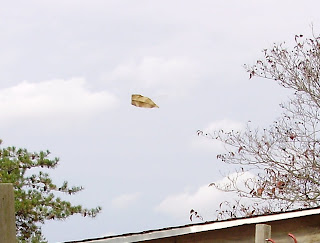 Normally we aren't supposed to get tornadic storms this late in the season... but wow today was a looloo. I was going to use today as my "A Day in the Slow Life"... but things fell apart pretty quickly here. So lets talk about storm preparedness instead. And you can kinda see how our slow and easy, predictable life changes pretty fast.

We knew the storm was coming and thanks to our local weather radar we could track it as it was barreling towards us. By the time the noon news came on they were already hopping around and throwing watches and warnings up on the screen. Since we were expecting high winds, and the likelihood that we'd loose power was pretty high, The Big Man hopped in the truck and headed to the store for a few things (mostly cat food and some canned food for the pup).  The last time we all lost power the local grocery was out of business for a while. So he hurried.

When the storm was a little over an hour away I took the hard working farm dogs out and we started stuffing the poultry and livestock in their shelters. When big weather is bearing down on you its best to have an attack plan to get the masses secured. Since things can change pretty quickly you need to follow a predictable pattern so the animals know what to do and won't just freak out because you are out there running around with your beatin' stick and screaming at them like a crazy person. Its hard to convince a hundred pieces of poultry to "move quickly to a shelter but do not panic." So use your routine to help you so they can work with you.

If time is short you may also need to prioritize. For instance our most valuable stock go in first - the goats and the turkeys. Fortunately they are also the easiest to herd in. Next we herd up all the littlest ones - any chicks or ducklings - since you really only need to get the mommas moving in and the babies will follow.

We try for "critical mass" with the hens. The new roosters are learning to call the hens in (Fred always did this for me) so we get the roos running for the door first - and don't forget to use feed to get everyone moving in the right direction. Ducks are next mainly because they seem to be the most sensible if they had to fend for themselves...and they can tolerate the rain better than anyone.

The geese are next because they are super easy to get in - provided they are not on the pond. The guineas are the hardest so they are the last.  But they seem to be pretty cagey so by the time the dogs and I headed for them they were already heading into their coop.

Since most farm animals are herding/flocking types they don't want to be the only ones out - so if you have time take one more loop around and run any late comers in where ever you can secure them.  Then get all of your gates locked so they aren't out there flapping in the breeze...you don't want the gates to be ripped off the hinges. And close up all the windows in the barns and hen houses.

It goes without saying, the pigz are on their own. Good luck, oinkers!

And don't forget your barn cats. Our barn cats stuck suspiciously close to the garage today.

In the house we start scooping up the Insane Cat Posse. The most difficult to catch/corner get put into the bathrooms until we know for sure that we are in the clear or if we have to take further action. We have a finished daylight basement so we really don't have a storm cellar. But we do know where there are the fewest windows and the most amount of internal framing so that's our 'go to' spot. Make sure you have your phone and your wallet in your pocket. And sturdy shoes on your feet.

We move the dogs downstairs even if there are only strong thunderstorms - our old lady dog and Dog #2 get nervous in the storms... and Dog #1 just likes to be part of the excitement. If tornado warnings are issued we put the cats in carriers and line them up in the basement in the most secure area.

As far as preparations for us, we usually have flashlights, candles, and matches or lighters available and where we can reach them even if its dark. You DO have a good flashlight you can find in the dark, right?

Don't forget water. If there are storm warnings immediately start filling up buckets - for your poultry and livestock and also for you. I fill the biggest pots in the kitchen for cooking use and drinking. And then each of the bathrooms have several buckets as well.

This may sound like a lot of hullabaloo... but we have been without power a couple of times for several days at a time and we were glad we were ready. Not having water for you or your pets/stock kind of sucks. And you can always use your pre-filled buckets of water later on.

We don't have a generator, but we have a power inverter for our big truck. Our freezers are usually full and really efficient so they are OK for a while. They can be kept cold for several days by using the power inverter for a few minutes a couple times a day. And don't forget you can always get ice or snow and put them in your freezers/fridges to keep the contents cold.  If we have to open a fridge or freezer we strategically work as a team to open the door, grab what we need, and get the door closed as soon as possible. Usually we go in for the ice cream first.


We use our wood burning stove to heat the house and also cook. I make sure I have cookware that can take the high heat and we always have food that is easily heated. Don't forget you can also use your outdoor grill for cooking (always outside never move it inside!). One time we had bacon and eggs cooked on the grill - in the snow. And for heavens sakes don't forget a french press for your coffee - one must have the necessities!

So that's what I know about storm preparedness. Anybody else have any tips to share?
Posted by Ohiofarmgirl at 6:58 AM

- fill the bathtub(s) for scooping for flushing the toilet - that way buckets really can stay as drinking water
-Got plenty of batteries for those flashlights?
-If you take prescriptions, make sure there's enough of those of hand to get you through a time of not being able to get to town (I'm guilty of that one - waiting til the last minute to get my refills)
That's what I got - thanks for the handy reminders :-)

I have nothing to add. But is it a problem that I ground extra coffee and made a pot of french press before I did anything else? LOL! That storm was a big letdown. Fortunately, I guess. Though I kinda like all the excitement. Have a wonderful day OFG, it's lovely outside today.
-Java

I've read the average American household today only has 3 days of food on hand! Obviously not the case for a farmstead (especially with meals-on-legs out in the barn).

I would add to have some cash on hand. If power is out, you can't swipe a credit card... and the good ol' paper dollar is accepted by everyone!

Great list! I blogged about battening down the hatches on our Halloween Castle last night. What is it with Ohio and high winds? My husband built the castle well, though. We didn't lose a thing off of it. Glad all the animals were safe.

B - heh heh heh.. a house full of nervous cats and full bathtubs doesn't work for us.. but yes - this is the best way to have water for the bathroom.

hi Java! one must make sacrifices.. have a bag of ground coffee on hand. ha!

Isn't that shocking, Austin? But I guess I used to live like that also. Food on the hoof is the best insurance. Great thought about having cash on hand.

Hi Sara! Wasn't that ridiculous? At one point they were saying the winds were 100mph!!! For heavens sakes.

You might want to make sure you have more than a 3 day supply of cat food at your place, the Posse WILL eat, what that is is the question.

This may sound funny but the Commander likes to have a few MRE's (meals ready to eat) on hand for emergencies. They are basically what the military uses in the field, and it is self contained and cooks up hot by adding water.

Actually, CC, I think its a great idea. The military works because.. it works. The other benefit to having MRE's is that they are easy to pack and carry. If we had to bug out it would be a challenge getting all these meals on the hoof to come along quietly and in an orderly fashion. Great tip!

As a former military wife, those MRE's are pretty tasty too!

"Its hard to convince a hundred pieces of poultry to "move quickly to a shelter but do not panic.""

hey Katiegirl! ha you said it... herding clucks is kinda like herding cats.
;-)