Creepy Meat - a bucket of laughs

Its time for a creepy meat update - they are just over 3 weeks now and we have moved them out of the basement. Thank heaven. It was starting to get mighty stinky down in the basement. And several of them managed to pop out of the kiddie pool they were brooding in. 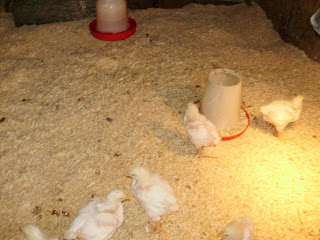 We fixed up half of the turkey house for them. They are now bedded down in pine shavings over gravel in one of the coops. They turkeys are in the other coop next door and the formerly-Inside-Meeps sleep just inside the door of the turkey house (but not in the coop. Got that?).  I used a bucket to transport them 4 at a time out to their new home. The dog thought this was the best thing he'd ever seen. It was a bucket of laughs for sure.  And yes, its a kitty litter bucket. They are good for everything, including meat transport. 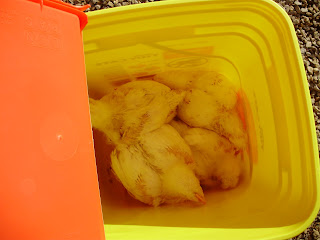 As always, the dog was very happy to help. 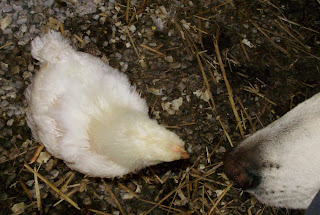 Meat, meet Mutt.
In fact, the dog kept them from popping out. It seemed that they were interested in heading outside.. but we'll put them on the grass on a warmer day when they are more feathered in. 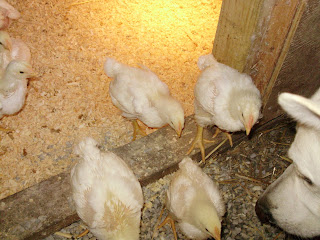 Usually the dog herds slightly larger animals.
So far so good. We set up the heat light in a corner so they would be out of the breeze if the outside door is open and we moved to a hanging feeder and drinker. We are also starting to follow a 12 hours with and 12 hours without food. Some folks use this method so the meat chickens don't grow out too fast and flop over dead. While we want them to grow out effectively, we also don't want to rush. We are using a 20% un-medicated chick feed. Some folks use a higher protein for faster grow out, but since the "green muscle incident" we'd rather they just take their time.

When I walk in to check on them in the mornings they attack my boots. Won't I have the last laugh...

In other brooding news... The Four Pack, our incubator hatched baby turkeys, are doing great. Poults tend to be more fragile than chicken chicks so we've been watching them closely. I've had to put them in the bra-brooder a couple times to make sure they are warm and dry enough. Somehow they spilled their water the other day and were wet and cold. I had a shirt-full of peeps until everyone dried off.

Also if any of the poults looks like they  need a little pep in their step, I give them some "momma" time and put them in my shirt. This way they can hear and feel my heartbeat and it allows them to calm down and warm up. If they had a turkey momma they would climb up into her feathers and hold on. They mimic this by crawling up under my chin, under my arm, or wherever they can get the most skin-to-feather contact. Its actually pretty cute. And no, no one has pooped on me yet... but it probably wouldn't even phase me.

That's all the news, Happy Friday Everyone!
Posted by Ohiofarmgirl at 9:18 AM

Yes, those buckets are good for everything! I collected 30ish of them when I lived in the city. Restaurants will clean them out and put them next to their dumpsters for people to come and pick up.