More on the giant squash

You'll remember the giant squash from a while back? Our weird cat, Pepper, was giving it the business?  I'm feeling pumpkin-y (or squash-y) this week, so begins the week of pumpkins.

Yesterday I cooked down our beautiful blue pumpkin and got enough puree for at least 8 pies, which should just get us started. Everyone knows you can cook down a real pumpkin, right? It doens't just come from a can? More on that later... but first, a little tomfoolery.

We actually had a giant squash blow out the other night. In a matter of hours one of them disintegrated into mush and slimed the basement (ick). So I'm guessing our bad non-basement isn't going to be the best place to store them. Or maybe those giant squash have got more diabolical plans than laying there quietly waiting to become pies?

They seemed to have an odd effect on The (already) Insane Cat Posse. I'm guessing aliens? The first wave of an invasion? These photos were provided from a reliable source. Grab your tin foil hat and read on .... if you dare... muuuuhhhaaawwwwaaahaaahaahaaa

Pepper made first contact - we know that already... but she seemed to have some kind of special relationship with them.. as if she understood them.... 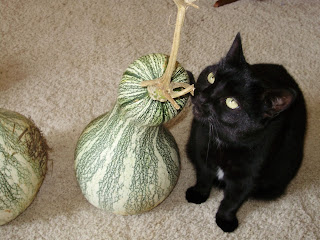 But then Peep, our little calico got in on the action and then things took a turn for the worse... 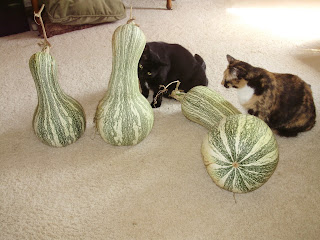 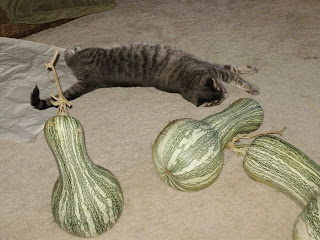 Little Mo, aka Mr. DoomSpoons, was no match at all and was quickly surrounded 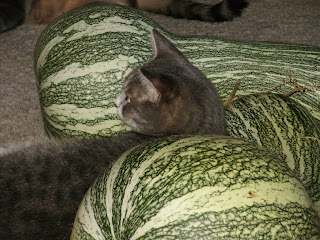 And then they turned Moose into a zombie and it was all over... 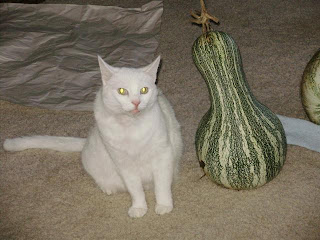 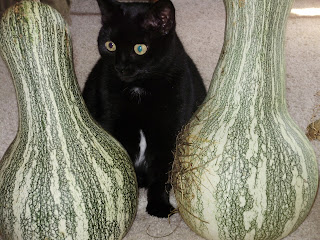 ... it was then we realized she wasn't a cat at all... but a holy half dead who had seen the UnderVerse.*

* Points for properly identifying random sci-fi reference, apologies for nerdiness.
Posted by Ohiofarmgirl at 8:48 AM

I'm not a big Vin Diesel fan but.....Cats do see well in the Pitch Black. The trick is to be able to see as well in a dark mirror in the dark. Cats are always best at this because they have nine lives, close to immortal, every life could be like a sequel to the last......

Wonderful pictures of the posse. I can't imagine all of them sleeping on you in the bed.

That would be a great movie! The Nine Lives of Mr. DoomSpoons! ha!

But there's not alot of sleeping if all those cats are in the bed. Mostly we hope they are spending their nites doing small crimes so we can catch a few winks.

I love the cats with the squash. How adorable.

Love this!!! We have a black kitty named Pepper too :)

Joni, when we have to hurry we always joke we need to "shake a little Pepper on it." Inevitably our Pepper is used as a visual aide. She doesnt think we are funny anymore.