They are two weeks old! Here's the creepy meats lookin' at ya: 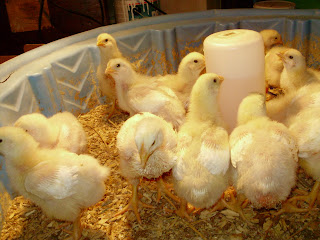 They are getting big. For reference, they are now all bigger than Floppy's Five who are five weeks old!  So far, its going pretty well. They are just about too big for the kidding pool and we had one escapee. Fortunately the chicks have a vertical leap of about a quart of an inch.

Of course, brooding chicks in a house full of cats can be tricky. Especially since most of The Insane Cat Posse came to us as foundlings and wanderers who were descended from the mightiest of all feral and professional barn cats. Well, except for Little Mo.

For instance, we believe our Nicholas to be a direct descendant of Dragon, son of Thor HammerPaw. Dragon's fell deeds were so terrible that his very name was whispered like a curse.  His given name is unpronounceable in the common tongue but roughly translates to 'Death Comes By Night' and sounds phonetically like the final bite given to songbirds in the throes of death. The story of Nicholas' birth is somewhat fuzzy but we think Dragon's mate was 'She Who's Steps Make Field Mice Faint', whom we called Mrs. Fluffypants.

So its been interesting around here. The creepy meats will be moved out to the turkey house next week. But for now we are being extra vigilant. Both The Big Man and myself have had nightmares about the cats getting into the basement where the meat chicks are happily popping around.  It would be a bloodbath. Yikes!

We've had a few problems with these chicks and had a few more losses. One chick has a leg abnormality and we are treating him for "spraddle leg." Because they grow so fast we think he'll be OK.

We believe the chicks had the cocci and needed to treat them with Corid. The good news is that they responded immediately and we haven't had any more losses. 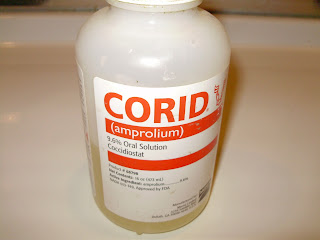 Some folks believe that you should always use medicated chick feed. However, we like to use the same chick feed for everyone - including the ducklings who cannot have it. So we used this medication which you can buy at a feed store. The dosage for the 9.6% solution in a QUART drinker is just under a teaspoon. However, as with everything you should do your own research. For a wildly dull explanation of cocci check this out. Otherwise search on your favorite sites for more info.

Altho some may argue (and believe me, for some reason poultry people LOVE to argue) about the causes of cocci, its just another reason why we think the meat chickens are creepy. Of all the momma raised chicks we've had, we've never had to treat for cocci, never had random deaths (we've had losses from accidents tho), and never had any leg problems.

Is it worth it with all these additional precautions? Well, we are thinking that by the mid-November we'll have some tasty chicken and dumplings. We'll letcha know.

Keep the faith and don't let the meats creep you out too badly! By the way, some of the hatcheries are starting to have their end of season sales. Don't forget to sign up for their "weekly specials emails" to get some cheap and creepy meats!
Posted by Ohiofarmgirl at 6:54 AM

I'm so waiting for the book of ThorThunderpaw and She who's steps make field mice faint............I'd totally read that and so would my daughter!

We never used medicated feed with our little peeps either and they all turned out fine. Good information on cocci and corid, I will keep that in mind.

They are so darn cute! Cannot think about them being dinner!!!

hi GW! I have a story brewing about the history of our barncats, for sure. I love when there is a light snowfall and we can see all the pawprints in the fresh snow.. ah.. the secret life of barncats.

WCG - golly they get out of the 'cute' phase soon enough. wow! They are still in the basement and are stinkin' it up pretty good. Eek!

Mr.H - sometimes you really have to look for the non-medicated feeds. We like the Dumor brand from TSC.