Our fourth hatchling made his debut this morning... with a little help from me. This is what I found when I went to check the incubator... 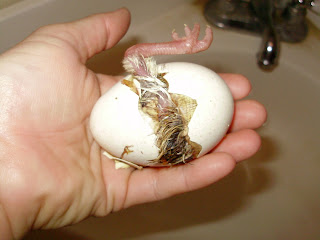 A+ for effort.. but C- for implementation.  Hey buddy! Its head first not foot first!
Usually they get their beaks out first so they can breathe and use their egg tooth to break the shell. But this one was a little "breech"...So I helped free him from his pod.. I mean.. egg. 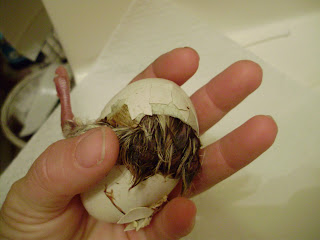 See how the membrane has already dried? Look just below where the egg shell is cracked.  Use the zoom feature to see more clearly.

I'm thinking we need more moisture in the incubator.  This is the second one who has gotten stuck because the membrane inside the eggshell was too dry for him to bust out. We'll be working on that. For now he's drying off in the incubator then we'll put him in the brooder with the rest later on.

The membrane had pretty much pulled away from the shell and was just stuck on the top of his head. The shell came off in two big pieces and he was somewhat dry. I'm glad I got him out.

Some folks think you should not help with the pipping process because they feel a chick that is not strong enough to hatch on its own probably wouldn't live. But honestly... if they are going to die anyway you might as well try to help. We took this approach before and ended up pipping out 3 or 4 poults who lived, thrived, and grew out just fine. So our position is, why not try to give them a fighting chance?

Hatchlings #2 and #3 spent some time in my "bra-brooder" yesterday. They had gotten wet from their drinker and were chilled. But they got dry soon enough and were just so cute. Their Peeps of Misery turned to Musically Peeping and all was right with the world. After sleeping for a while with their little heads on my chest they started screwing around... and then there was too much of a ruckus in my shirt. I popped them in the brooder and they spent the rest of the day trying to figure out what the chick food was...they got it.

Happy Monday!
Posted by Ohiofarmgirl at 8:59 AM

Great approach to helping chicks out of their shells. I think that idea could be applied to helping anyone down on their luck. :)

Thats right, LBSS! We all could use a hand sometimes.

Ha, the picture with the exposed leg reminded me of an old cartoon where one of the chickens ran around still inside its shell. I can't remember which one this minute but I'll figure it out.....