Fall winds up before it winds down

Fall has its own tempo and it moves pretty fast...it definitely winds up before it winds down. 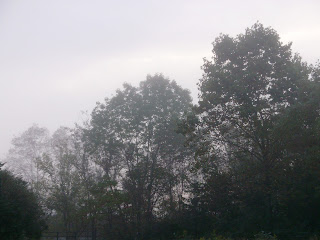 We get a lot of fog this time of year - so much that sometimes the local schools are on 1 or 2 hour delays.  Its kinda like the marine layer I we had on the left coast.

There is still tons of work to do.  My 'to do' list seems to get longer with each day... but we have less daylight.  And all we want to do is hunker down with the longer nites.

I'm trying to juggle working inside to get things canned or frozen... and also trying to get work done outside.  We still have to rip out some of the gardens, get the rest of the cover crops planted, and get everyone ready for the cold weather. They are even saying the "F" word.... that's right.. Frost!  So things are really hopping around here.

We haven't had Farm Notes for a while.. here's what's happening:
* Creepy meats - still creepy. We moved them into a kiddie pool but they are still inside. 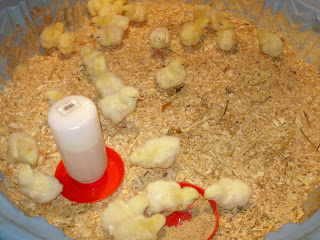 * Floppy and The Five - cute cute cute... but they are starting to wander so we are keeping them cooped until they are a bit bigger.
* Mrs. Dowlrimple and The Bugs - wow! They are getting huge - there is one enormous Barred Rock rooster who is almost as big as our hens. Here they are enjoying the sun: 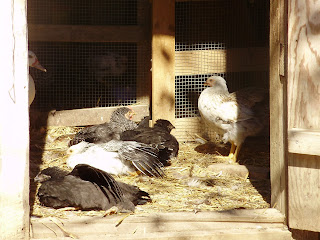 * Goats:  We took Debbie to the breeder! We think she is knocked up - more on this later. Nibbles is out there like the Queen of Nile, reclining on her couch, not caring what anybody thinks. And she's eatin' like she ain't goin to prom. Nibbles! Put down the feed! Wow.. I need to cut her off.
* Yesterday I found a new duckling in the hen house... Dash finally hatched.  Its been a long, long summer for her. Finally she has a little one.
* The geese are crazy, but I love having a whole flock.
* Pigz are getting big. And still out there stinking it up. But they like their new area and are doing a great job of "hogging" it all down. 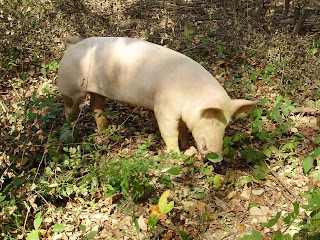 So that's the quick round up. Happy Fall Everyone!
Posted by Ohiofarmgirl at 6:29 AM

You are one busy bee OFG! I think it's the nature of living on a farm - never ending work. When somebody asked me to build a jetty by the river I said that's priority no. 30!

Thats just right. I normally tell people that I have "at least 97 things to do" at any one time. I laugh when people tell me that I lucking because "don't work." HA! Some days I'd be very happy to sit in a soft chair and enjoy the air conditioning all day.

We get fog like that here in Illinois as well, it can be pretty crazy! We have yet to have any this year though.