It happened. The first frost - granted it was extremely light and I don't think there will be any real damage but... its here. 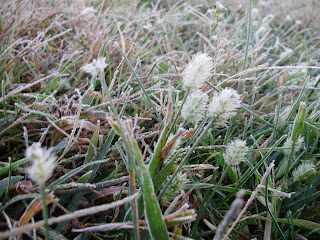 Last nite I covered the last of the basil and also took up the last of the green tomatoes. We also put another heat lamp in for the meats so they wouldn't be cold. Normally I'd be mad at the first frost but I have to tell you, this year I'm OK with it. I'm tired and need to turn my attention to other things. The garden is mostly tucked in but I still need to pull up, clean off, and till under a few areas.  But other than that I need to use this time between gardening and hog slaughtering to get a few construction projects done.

Last year we built the duck garage, this year I need to put a decent foundation of gravel in the goose house and frame in an actual door and 4th wall. We kinda hillbillied something up last year that worked just fine.  Their house used to be a 3 walled shed for firewood. But its perfect for our flock of honkers.

We have the geese next to the turkeys on purpose. OD and his crew are great night watchmen and if there are any shenanigans out there they will alert us. They will also alert us if a leaf blows by, or if another goose is in their spot, or if someone has a feather out of place, or if the feather blows by, or.. well you get the picture.

Anyway. The first frost also means something else...it means that I get some extra sleep. No sense in running right out there until it warms up a little. In the winter we don't let the flocks out until after the sun clears the treeline. I keep dreaming of that magical day when I really get to sleep in. But Little Mo and the Insane Cat Posse usually get me up early enough.

Say - how about a round of applause for Bethanial11!?  Did you see over on Thy Hand Provided that she won a major award!?! Great work, baby! And if someone would tell Thy Hand how much I appreciate her?  For whatever reason I can't leave comments on her site. But wow! I think she is the tops. I found her over on Mr. H's superb site. He's my hero - I'll never be that organized and I can only hope to be that productive.

Happy First Frost everyone! Now hurry -- back to bed.. no sense getting out there just to freeze!
Posted by Ohiofarmgirl at 8:29 AM

Hey, your my hero too. It's one thing to manage a bunch of dumb vegetables that don't talk back, if they start to I'll know I some serious problems, but it's a whole other game raising all those farm animals.

We had our first really hard frost this morning...brr. Happy first frost.:)

Thanks for the shout-out, OhioFarmGirl! I'll make sure to let THHP know how much you appreciate her blog!

I'm still trying to figure out what all I want to get; I was FLOORED when I saw my name in her post! (Biggest decision - I want to get into canning, and I've heard wonderful things about steam canning - so, do I get that steam canner? Looks like it holds 4 quarts in the pic, but it doesn't say # of quarts/pints it'll process at one time.)

*Going over to Thy Hand Hath Provided RIGHT NOW to point her in your direction :-)*

Aw heck, I just walk tall and carry a big farm dog to keep all these critters in line!
;-)

Yay Bethanial11! and welcome to THHP if you pop on by!

You Can Call Me Jane said...

Hello! I'm so sorry you have had trouble commenting! A couple other reader have had similar problems and I'm not sure what to do about it. I allow anyone to comment anonymously, so I'm wondering if there may be a setting on your computer that is causing the problem? You can always email me a comment or entry in a giveaway and I will post it for you (thyhand123@gmail.com).

You've got quite the site here! Great job tucking in your garden. I've still got some some work to do before it's allowed to frost here:-).

Now that I know where you "live", I'll have to stop by more often!

Hmmm...wish I can swap places with you OFG, it's been hot (and I mean 90 degrees) and dry here for five days.

Jack Frost has been hanging around here in northern Minnesota for a few weeks now, looks like he saw my link to your blag and decided to pay you a visit.

When are you going to put in your winter wheat?

I'm glad, Grandpa, that the hot days are behind us. I just love the cooler weather.

CC - we've been putting it in now. It can grow even with the slightest above-freezing temperatures. Your ground should still be warm enough.

Thanks THHP! You are welcome to visit any time!