OK maybe "murder" is a strong term but I watched one of the crime shows last nite. Anyway - does everyone know how to cook down a pumpkin? Lets review. 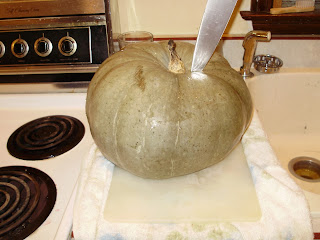 Go and grow a pumpkin. Or, if the guineas get and "F-" for squash bug killing, go on down to your local farmer and buy a pumpkin. But don't pay $12 for heavens sakes. Sheesh. We paid $4 for this one and have enough pumpkin puree for another batch of scones and 4 pies.

Next - stab it with the biggest knife you have. But don't cut your hand off because, you know, pumpkins are kind of rolly-aroundy.  Put a towel under your cutting board for extra stability. Be careful.

Cut all the way around and pry open. Behold. Pumpkin guts. 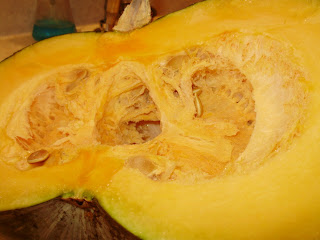 Now scoop 'em out and put the seeds and such in a colandar. You'll be needing them later.

Line the biggest and DEEPEST baking tray you have with foil - you'll thank me later for the easy clean up.  Place pumpkin halves cut side down on the baking tray. 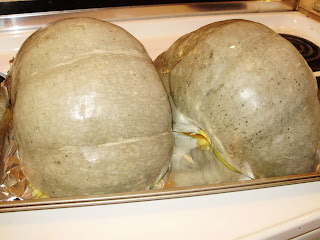 Bake for about an hour or so at 350* - keep on cookin' until a sharp knife can easily pierce the skin. Carefully remove from the oven and let it cool down. The last time I did this the baking tray was full of of water from the pumpkin - the deep tray kept it from getting all over the oven. 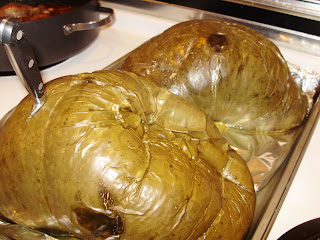 When cool, use a big spoon to scoop out the flesh. At this point the flesh still has too much water in it for most recipes. You can put the flesh in a cheese cloth lined colandar to drain to be used immediately. 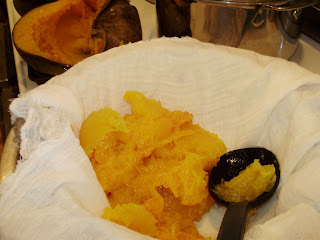 Or just puree with a hand blender, measure in 2 cup portions, and put in containers for the freezer. 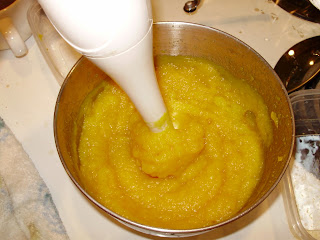 The extra water will come out as it thaws first. Just carefully pour out as the water melts. A small can of pumpkin is about 1 3/4 cup pumpkin. So a 2 cup portion is just about right - especially after you pour out the extra water.

Don't forget the seeds! Keep for cooking, rinse and dry for planting next year, or throw the whole shootin' match out for the clucks.

Now that you know how, you'll never buy another can of pumpkin again. Now go and getcha a pumpkin and cook him down.
Posted by Ohiofarmgirl at 9:17 AM

I'm going to talk The Youngun into letting me murder one of her punkins.......we've got two big ones for jacks and two small ones just because they were purty.......I must execute one of them..........

It feels like I'm murdering that pumpkin sometimes, though!

Thanks for all the handy tips - the most experience I'd had was carving one for porch decoration. But mine didn't get carved (couldn't find the fall leaf pattern I wanted) so I just might butcher him up, and give Libby's a run for her money ;-)

What if I don't have a tremendously deep roasting pan? 'Bout the deepest thing I got is your standard 9x13 or 11x15 pans. If it fits (even it's only a 1/2 at a time) could I use my countertop turkey roaster?

B - sure you can use a roaster.. or just use a normal baking tray and keep an eye on the water level. Some won't give off much but wow this last one was really juicy. If your pan starts to fill up, CAREFULLY, take it out of the oven and tilt into the sink. Don't let your pumpkins get away from you tho
;-)

I don't like green eggs and ham
What is that thing, a green pumpkin or a yam?

Keep going, I want to see the whole pumpkin pie recipe right down to you eating it for breakfast.

I actually listened to a radio show yesterday about what kind of pumpkins make the best pies (sugar).

its totally for breakfast!
;-)

okay, pumpkin murdered and cooked, cooling on counter, no, and I mean NO water/liquid/anything in the baking pans (all FOUR of them - huge pumpkin). Is this a bad sign? The knife pokes through quite easily, but the flesh does look kinda dry....

After scraping (with metal spoon, bare hands and cutting peel away with knife) about 1/2 the pumpkin pulp (and I found the liquid you btw - the more it cooled, the more came out), I decided my monster needed to cook longer. So what's scraped out is cooking in the (overly full) crockpot, and the the other half is back in the oven baking some more. Will keep you posted - most likely expect a blog post out of this one ;-) Me and the dog thing the bits closest to the skin are quite yummy, though! (I promise, I'm not sharing on purpose)