Last nite we had frost warnings. Seriously. Isn't this whole winter thing over? It was 90* just a few days ago! 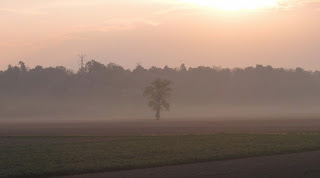 No frost in this field... thank heaven!

We rushed thru chores so we could get everything in the garden and waiting to be planted safely covered up. I had a lot of seedlings out there in trays. But we got them all under cover just in case.

This morning it was only 37* and then rapidly rose to 40* as the sun was coming up.... so the near-frost-crisis was averted.

But it made for an annoyingly sleepless night. Especially since the dogs were really barky and woofy. At one point we all ran outside to see what was going on.... skunk. Skunk as far as the nose could smell.

Someone got it last nite and thank heavens it was not one of our dogs. But now we need to be on high alert for skulky skunks sneaking around. Skunks are one reason when we don't "get the dog." Skunks are predators tho, so don't let them get a foothold in your property.

If you are one of the poor saps who's dog got skunked, don't reach for the tomatoes but rather use the Dawn dishwashing plus peroxide mix. It really really works.

For now the air has cleared and no frost settled on our tender plants.

Happy Thursday everyone! Did you dog get skunked? Did the frost get any of your plants?

Posted by Ohiofarmgirl at 8:48 AM

One of our outdoor cats got skunked but we just gave him a wide berth until he wasn't quite so ripe. We built a fire in the wood stove last night!