Kai MoleKiller. Or... the importance of "Show me."

We had an epic dig day yesterday. Zander and Kai dug an impressive hole. Then Kai found and killed two moles - two! Those big nasty ones with the weird feet. We sang songs of her battle glory last nite.

One of the best things we started doing with our best hunter was to teach Kai the command, "Show Me." This means... "I know that you've been up to something so take me to what you've done." Muddy faces, a little blood on her fur or mouth, death screams of victims, or a particularly funny look warrant the command "Show Me" ..... and running.

In our case we especially need this command because Kai and Zander hunt silently. Not one bark. It's the way of the BearSlayers - they are the silent hunters. Which is a problem because I'll turn around and they have disappeared like shadows into the woods. Not entirely a problem tho because I'll ask Ti, "Where is your sister?" Or "Where is the puppy?" He always rats them out. 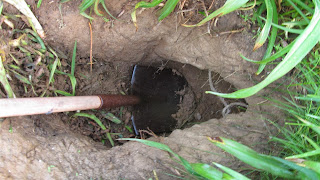 It was an impressive hole. Maybe a ground hog?

Kai knows to come and get me... or bring me her kills. We've reinforced this by excitedly hopping around, clapping our hands, and then immediately running to the house for a treat followed by all kinds of praises.

She also knows she will not get this response if her kill is a chicken. Or a duck. Just varmints.

The other dogs know this too (mostly) but with Ti I am usually more conversational and say, "where is it?" Lucky is not a natural born killah and Zander and Kai always hunt as a team. So we've really worked on teaching this to Kai. 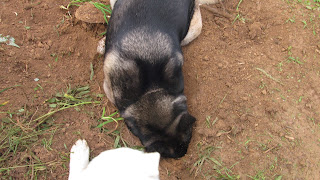 Of course, after I filled in the hole they started digging it out again. Could be bears down there.

Why do we need this command? Mostly to make sure there are not dead varmints out there in the yard... and also because we need to know what is coming out of the woods. And we really don't want the dogs to eat stuff like that due to possible disease and probably worms and parasites. Luckily Zander and Kai are "soft mouthed" so they mostly just kill it by shaking then spit it out. After they've mouthed on it a while. Ew. 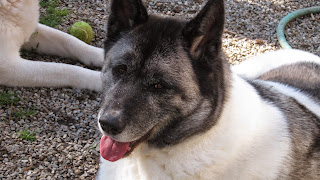 Kai found her moles in different parts of the yard so I'm not sure if she was just particularly on point or if the Mole Nation are on the march. But either way she got 'em.. she got 'em real good.

Happy Wednesday everyone! Do you have a big hole in your garden? Does your dog bring you their kills or take you to the slain bodies of the enemy?


Posted by Ohiofarmgirl at 7:40 AM

Your dogs are SO smart. So far Taz has not killed anything, especially not chickens, and that is a good thing. I tried to encourage her to catch the mouse we had in the kitchen recently, absolutely no interest. Occasionally she chases rabbits. When we had Cheryl and Chime they used to always chase rabbits and have no hope of catching them. One day we found a dead rabbit in the house yard and they were so pleased, look what we got! But I'm pretty sure that one of them found a dead rabbit, or a very sick and slow rabbit, and tried to pass it off as their own kill. Dogs are funny.

Our rottweiller girls love digging, although I am not sure what they are trying to dig up and neither do they!

Thanks Liz! They really are supersmart... and we knew what jobs we wanted them to have. So we really encouraged Kai and Zander to hunt. And yes.. dogs are very very funny! Give Taz kisses!

It's funny, Vera, they probably smell something - which is why they are digging but they just arent fast enough.
;-)

I have three aussies, and my baby of the family digs, but he tries hiding his things in the holes. They can be ankle breakers if you are unaware of them!
One of my aussies that passed was a bunny, mole , bird killer, we never knew how she caught these things, but we found on a few occasions that the other two dogs were eating Joys kill, ewwww
I love smart dogs though. A biddable easily trained dog is a dream

You said it, Longtimewife, a well trained dog is a treasure. I'm lucky because my crew likes to work - they make my life so much easier.
:-)

I just found your blog and I'm enjoying it. I live in NE Ohio.

I WISH we had a good hunter around here. No dogs and I'm looking at my two cats right now that are... um... well... let's face it, cute but totally useless. I'm guessing that the cats are not trainable. Or smart enough to convince me that they're not.

Pretty sure those cats know what they are doing, Cottontail... ha!
:-)

Jessie has caught a couple of rabbits and there was no getting one of them (a baby one) off her. She was so pleased with her self and just sat down and ate the whole thing. She killed a young chicken once but I think it was an accident as it was buried but not chewed or bloody.