We were some of the poor saps who were sitting around in the dark last nite. We had extremely fast moving storms come thru. While we were glad that the storms did not drop any tornadoes.... the sirens were going off for some folks. Now we are in the clear and it's a great time to review your summer storm preps. 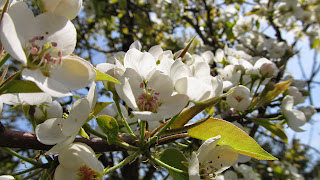 What are storm preps? They are the actions you take to prepare your home and barnyard for damaging winds, downed trees, or being without power. A few simple precautions will make a world of difference if the worst should happen.

To be sure there are a LOT of people who pooh-pooh the importance of storm preps. Those are the folks who stand there complaining about how bad it is and say that they "had no warning." Don't be those people. Sure no one wants to be called Chicken Little... but we operate from a "better safe than sorry" perspective. And frankly... out here you may be the last folks to get your power turned back on. It's not like living on the city grid where an hour in the dark makes everyone crabby. You might have to settle in for the long haul.

The derecho of 2012 was a significant event - some of the folks in the town nearest to us were without power for days and some folks were in the dark for more than a week. So don't think that everyone running around yelling "do your storm preps" is faking it or over reacting - some of us have just been thru it before.

Take an afternoon and get your ducks in a row. If you have livestock you just cant leave, drive into town, and shack up at the Holiday Inn. In the worst situation... like with Hurricane Sandy... there was no where to go for hundreds of miles. And you never know when you might actually have to "shelter in place."

More than anything this video shows the importance of having your storm preps done and keeping a weather eye to the sky. Watch the ticker to show how quickly their world changed. That dad and his kids were going to walk out of that house with nothing but the clothes on their back. Could you do it? And please, for the love of Pete, make sure you put good shoes on if weather is coming in. Shoes on your feet, keys in your pocket, and phone in your hand. That should be your mantra.

The longest we've been without power was four days...we were fine because we had our storm preps done. Now we have a good generator so we probably wouldn't even care if that happened again. Our biggest concern would be to keep the freezers frozen and make sure we could get water to the barnyard.

Inexperienced folks might pooh-pooh your storm preps but no one in the know will. So take an afternoon and make a plan, get your preps in place, and keep your weather eye to the sky.


Once we have all our systems squared away our biggest problem is just being annoyed. My husband likes to be power-less sometimes and gets all "isn't this great?" I don't think so. After about an hour I start muttering how I need my NetFlix and start grumping about everything. But we work it out.

Happy Tuesday everyone! Were you in the dark? Did you do your storm preps?

We're lucky we don't get anything quite that severe, usually. One thing you noted-
"I had a big roll of cash in my pocket", exactly! Too many people rely too much on plastic in an emergency. Cash is always good...