Chicken dinner, y'all. Oh yes. We are having chicken for dinner tonite. We butchered some of the meat chickens yesterday and I've been dreaming of this day for weeks. Last nite I told hubs that he was having the last non-chicken dinner for a good long time. From now on it will be all chicken, all the time. Nothing but chicken - yipee! 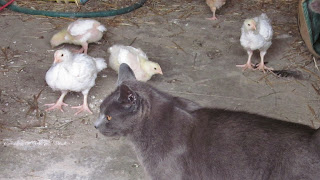 One of my pals asked when we let our chicks outside to run around. The short answer is.... when they are safe from the crows...and if the weather is mild. So when they are about "pigeon sized" we think they are OK to be out there toddling around.  At this point they are entirely feathered in and can regulate their body temperature. 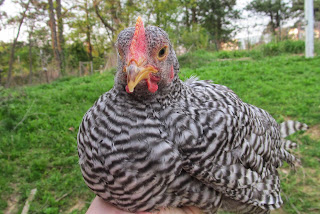 The barred rock are about the right size to be outside.

We also know, tho, that they will stick close to their pen...which is in the garage. So we just open the doors and let them peck around. They think it's hilarious to run outside, flap around, and then run back inside. All day long. Kai loves this. She thinks they look delicious in that snack size. 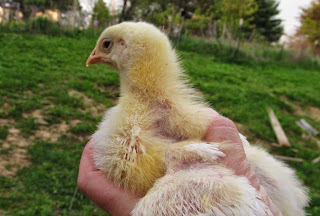 Batch 2 - in the ugly stage. Still 'handful' sized. Too small to be outside.

Batch2 and Batch3 of the meat chicks are too small to be outside. However.... we have had extraordinarily warm weather. It's supposed to be 70* this time of year. But we will probably clear 90* today. 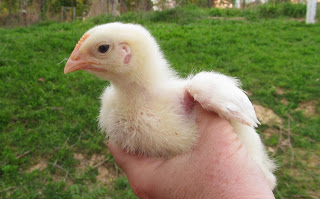 Batch3 - not feathered out and love the heat. Way too small to be outside.

It's too hot for them to be in the brooder so we let them loose in the garage. Mostly they stick together where the food and water is located. We open both ends of the garage (which is a big pole building) and put up hog panels on one end to keep the  chicks in and the geese out. On the other end I just put up a low barrier so the barred rocks can get outside - and flap around until they run back inside. This also keeps some of the hens out.

Aren't we worried about the barncats? Nope. For whatever reason our Shine, King of Barncats, has zero hoots for the chicks. He's a stone cold killer but he's never been interested in any of our baby poultry. Mostly he thinks they are annoying but that is it. Bobbi has even fewer hoots for them. The chicks are safe as kittens.

I'm heading out early to beat the heat.

Stay cool everyone and happy Friday!
Posted by Ohiofarmgirl at 7:19 AM

We also have a batch of barn cats who show no interest in chicks. I've never been able to account for it.

Dave - it was the best dinner EVER.

Rebecca - i cant tell if the cats know "that's mine" or if they chicks just aren't a challenge. it is amazing to me.
:-)