It sounds like the start of a bad joke but no fooling this is what has been happening around here. They say when it rains it pours and we have been flooded with goat problems. 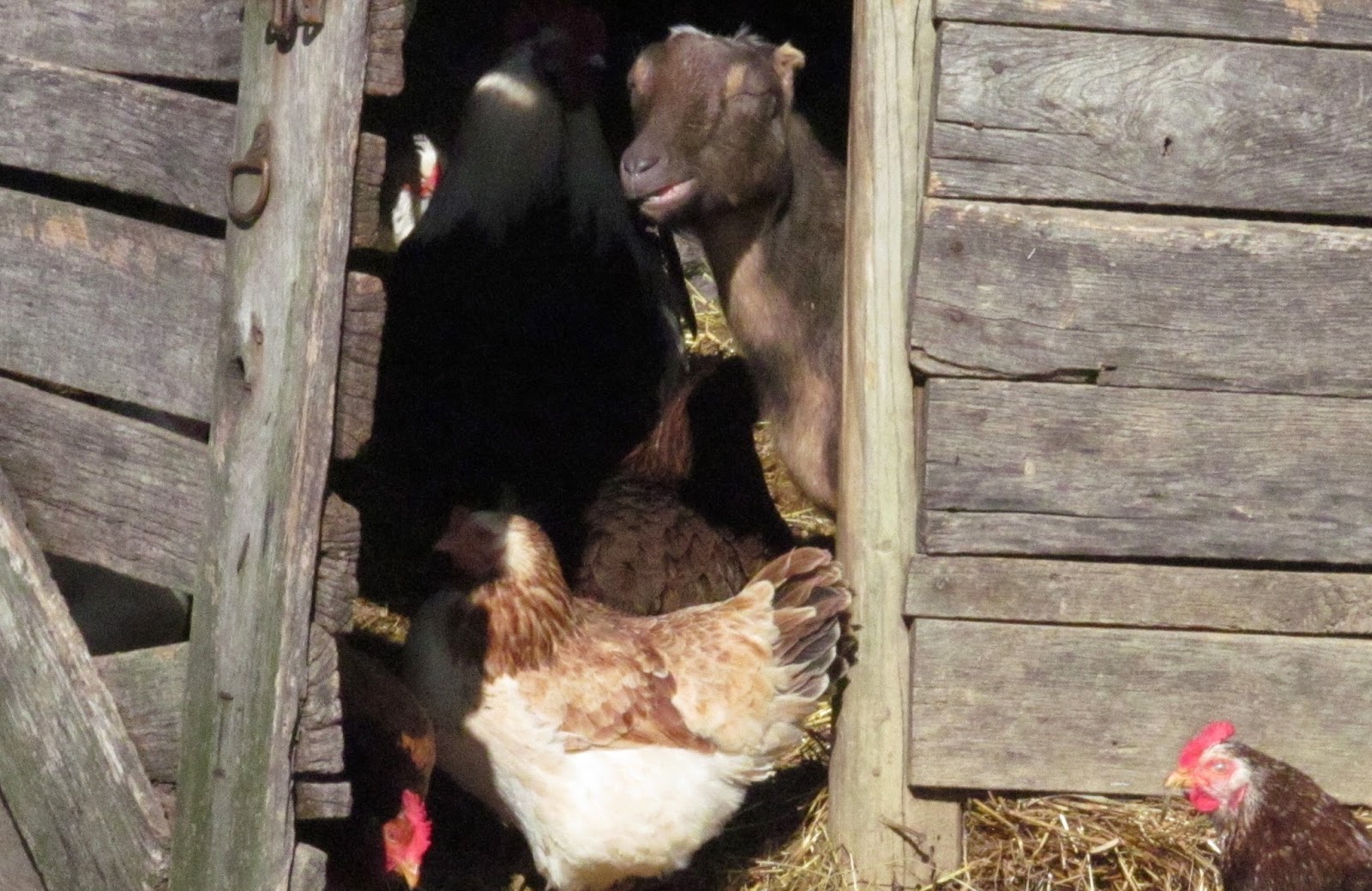 Nibbles in better days...before we called her Winky.

It started innocently enough. The other day I brought Nibbles up to the milk stand, took one look at her, and jumped back shrieking and clutching the dog.

"Holy tomatoes, Nibbles, what the heck?"

It was horrible. Her face was swollen up one side, her eye was red, and her pupil was cloudy. The dog and I refused to get near her.

"There is no way." I replied. "I think it's some kind of injury"

I did. It was. That guy is always right. Treatment is being applied and Nibbles is separated from everyone - that would be all the other goats who she absolutely hates. She is now standing out there screaming to be reunited because with the herd because, and I quote..."Maybe those other goats aren't so bad."  Tough too bads, Nibs, you are an infectious carrier and you have another five days to stand there. Alone.

Next up. Debbie. Dry. Almost entirely dry. Bone dry. Uselessly dry.  I reviewed all the normal reasons for sudden decreased milk production..... Was it too hot? Nope. Bad hay... maybe... more like "normal and not too bad hay." Then I checked her gums and eyelids. Yep. She needed to be wormed. Treatment applied and I got a bale of better hay while I'm waiting for our best hay folks to cut n bale this week.

Then I went out for morning rounds. One of the little cow goats was down. Real down. He wasn't getting up and his body temperature was cold. None of the other goats would get near him. He was hanging in there but he wasn't going to make it. I picked up the sad little bundle and put him in the garage, wrapped in a blanket, and then texted my husband that he might have to "do something" when he got home.  As it turned out the little goat didn't last that long.

So what happened? I have no idea. The best that I can tell is that he might have eaten something weird when they were grazing. We really don't have a lot in on our property that is poisonous... and one of the good things about goats is that they usually just eat a little of this and a little of that.  So they don't normally ingest enough of anything toxic to kill them. Normally. Outside of that I don't have any idea. He went downhill very very fast. Surprisingly fast.  Shockingly fast.

While it has been a challenging week in our goat world we continue to be grateful that this is our first and only goat loss. We think we are amazingly lucky especially when we heard stories of other folks from this spring. It seemed that many, many folks had hard times with an exceptionally difficult kidding season.

So onward and upward. I might, depending, have a rather hilarious, extremely insensitive, and completely inappropriate tale about goat carcass disposal later. You can only imagine. We'll see.

Happy Tuesday everyone! How's it going in your goat world?

Posted by Ohiofarmgirl at 7:42 AM

Sorry to hear about your goat dramas. Hopefully there is smooth sailing ahead.

What? No pink eye pictures? I'm envisioning a goat in a eye patch looking very pirate-like. Sorry for all the goat drama. Having kids of any species is a tough job.

Thanks Fiona! Debbie is on the upswing and Nibs is hanging in there. I think we are going to be ok. :-)

Tammy, its horrible. really. bah! And yeah we thought she should have a pirate patch too!

I believe according to another blog I am supposed to harass you about living on a farm and animals dying....clearly it is all because of you not because you are on a farm and these things happen... Note the dripping sarcasm. What I actually want to say is I hope your goat problems get better and thank you. Thanks for the encouragement to pursue my own dreams of a similar nature ans for your support and encouragement of all others out there in the same boat. It means a lot that you and others write about day to day life on a farm.

Nastasha, I laughed so hard...and then I got all "aw shuck-y" Thank you so much. *gives hugs*