He did it! Today our Zander helped us with the pigz for the first time! He was amazing! He did a great job! We were so wow'd that he has now earned the name "The Dread" for his exceptional hard workin' farm dog skills. From now on our Bubby will officially be known as The Dread Commander Zander, FoeHammer, Hannibal Bonecrusher. 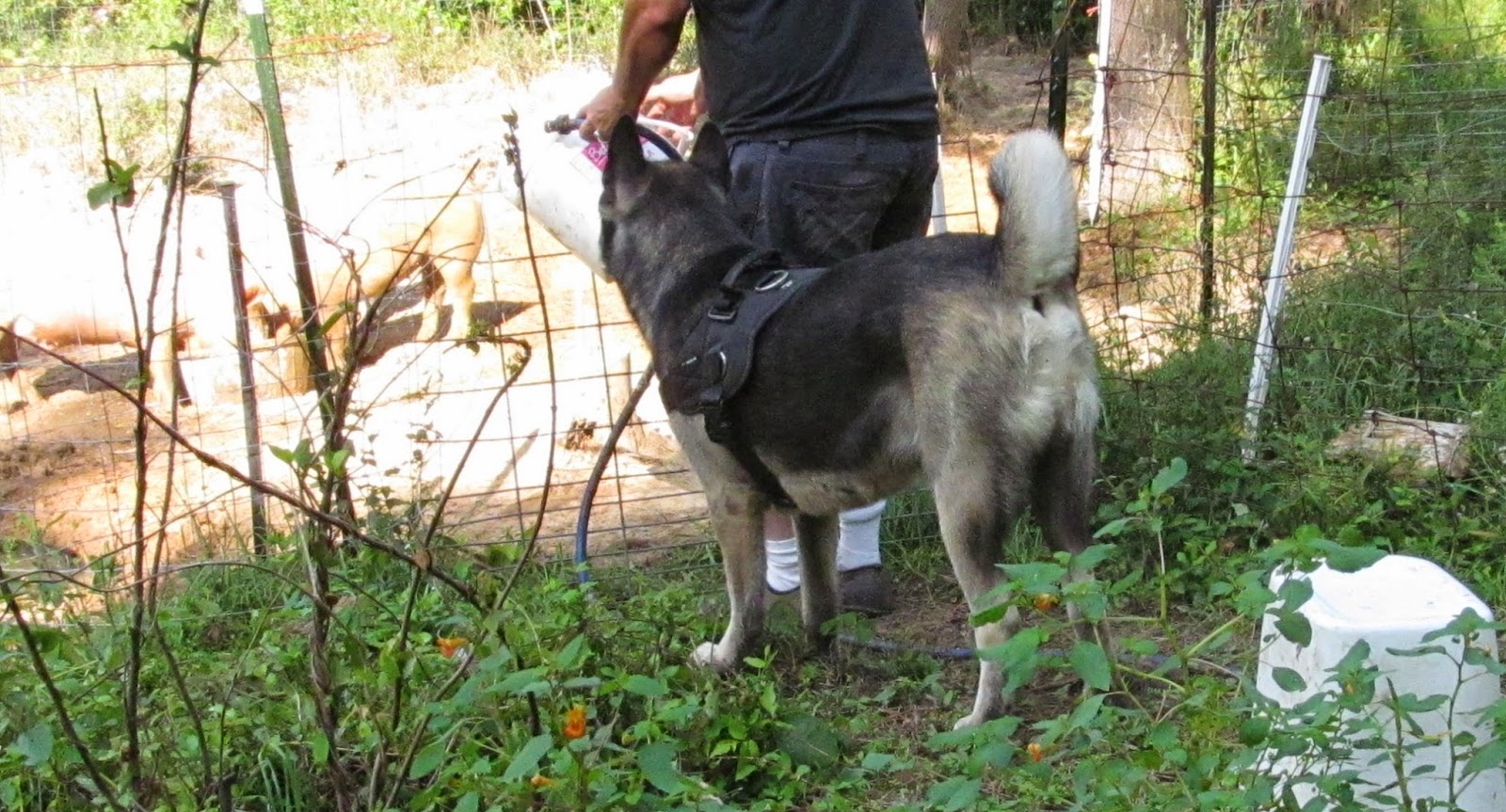 After Lucky's lackluster performance the other day we really wanted to give Zander a shot at working with the pigz. Today was the day. After Kai and Dog#1 moved the pigz off long enough for us to dump the food in the pig feeder I went back up the hill and got Zander's harness. Then Dog#1, Zander, and I went back down the hill where my husband was filling the pig drinker. We figured we'd just see what happened.

I had Zander by the handle... I mean... harness and we marched into the pig yard with husband standing close by. Dog#1 easily moved the pigz off their feed while I held Zander close by my side and told him, "Guard Momma."  He leaned in.... but whined and pulled toward the heavenly poop-scented pigz. Dog#1 was barking them off and heading them toward the woods. Zander wanted some of that action. 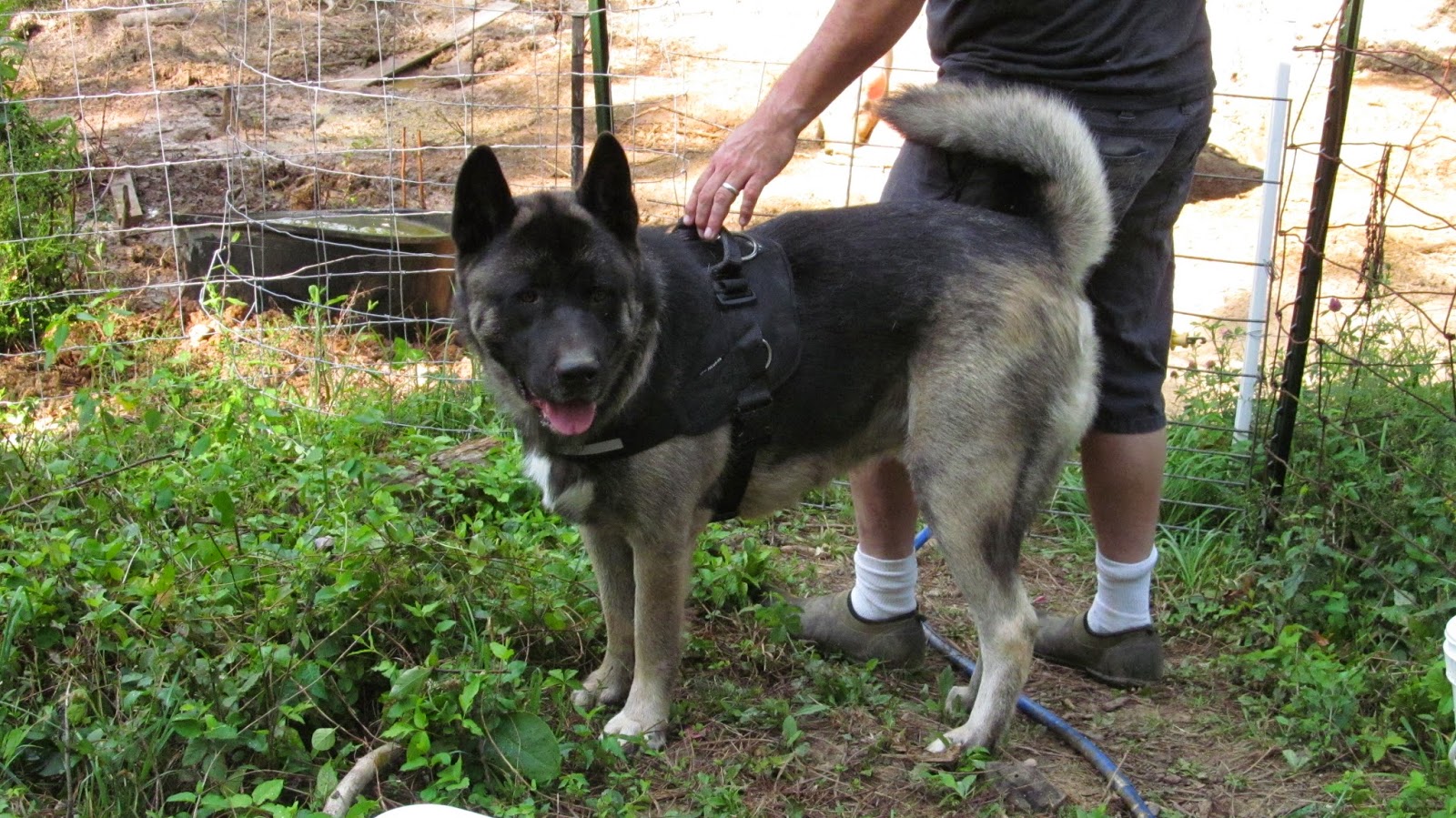 He's our big Bub. Look at that harness!  See the easy access handle on top?

Of course the pigz were all, "Look, man, we just want the milk and corn."  Too bad. We had some farm dog work to do.

After a couple minutes I called Dog#1 back to "Guard Momma" position and let the pigz come back up. "Move them off!" I commanded.... and let go of Zander.

He was extraordinary. Zander immediately stomped toward the pigz. He watched Dog#1 bark and circle toward the pigz and followed suit. It was incredible. The pigz moved off. Zander peed in their general direction.

We let the dogs move the pigz off and then had them come back to us several times. Zander's recall was near perfect. Believe me, this is quite an accomplishment for a "stubborn" breed dog, surrounded by pig poop, and hyped up by a new adventure. He never ran off, he never was over-aggressive, he didn't run around wildly or bark, but instead he worked those pigz and came back to me when called.  The only time he was distracted was over the ground hog hole...and the poop of course.

"Het! Het! Het!" I called...and both dogs stopped what they were doing and came back to me. "That's the way! Good dogs!" Then we all stormed out the gate and up the hill. We gave Zander tons of "good dog's" and lots of ear ruffles, and body rubs. He was very excited to be working and be part of the team. Even Titan gave him an approving nod. 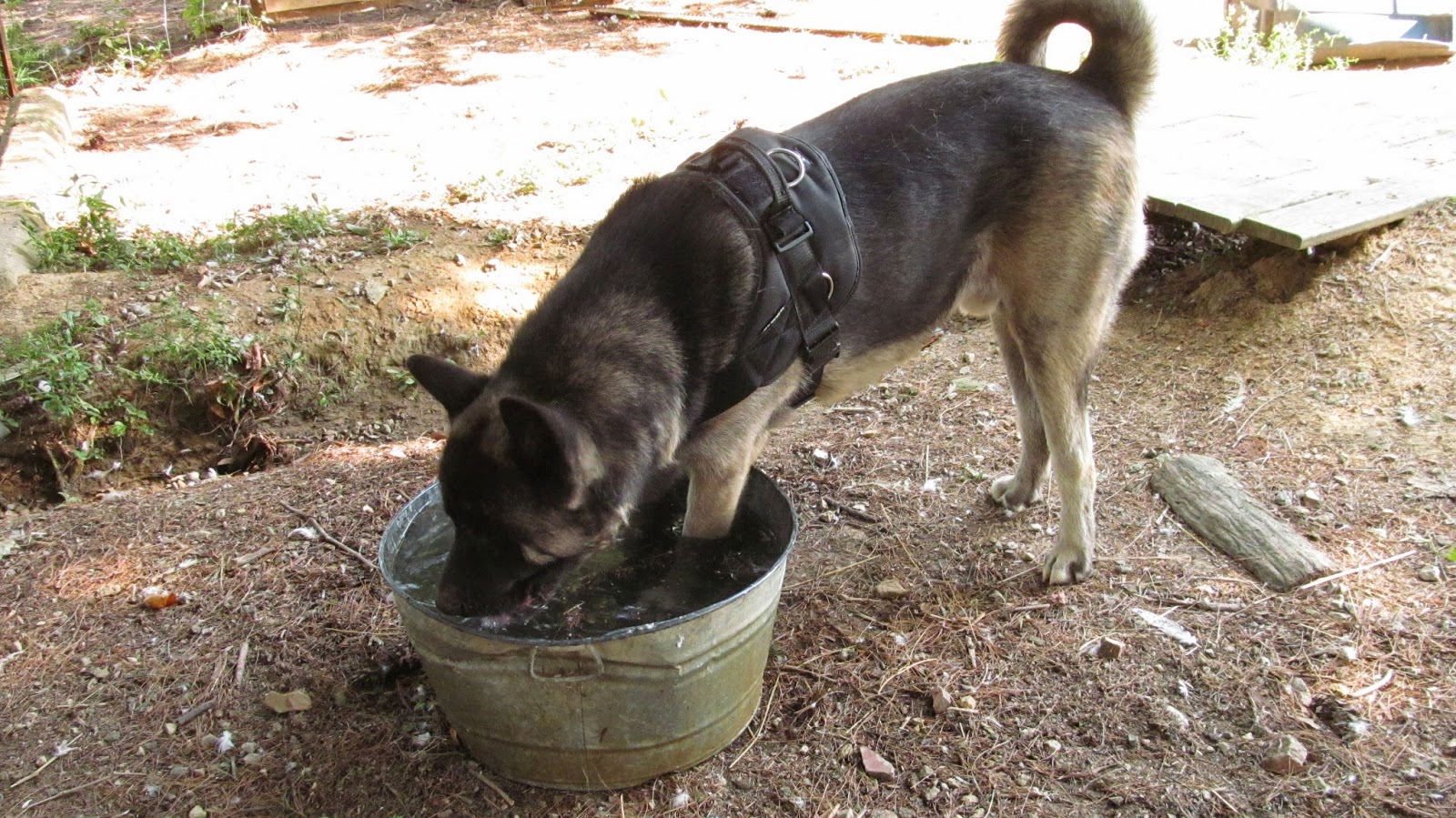 Afterwards we cooled off in the Bub Tub. He likes to stand in it.

Given the possibility that this could have gone very wrong... we were absolutely thrilled at Zander's performance. From now on he can come and work the pigz with me because we have so much confidence in how well he performed.

I'll probably keep using his harness for a while - but only as a signal to him that we are "working" and not just playing. Also it's easy for me to keep him close until he really learns "Guard Momma" which is our command for him to be right by my side and stand his ground in the face of danger...or that mean gander.

Why the harness and not a collar? We don't collar anyone - not the goats, cats, or dogs.  The supersmart Dog Horde quickly figured out that a collar is really just a handle that you can use to grab your opponent and throw them down upon the pondside. Plus, Zander and Kai have huge shoulders and can slip out of any collar in about 3 seconds. So we don't use them. We have harnesses for Kai and Zander and regular collars for Dog#1 and #2 if we need to go somewhere like the vet. Otherwise everyone is collar free and we control them with verbal commands.


Ever wonder what it's like to walk beside an enormous bear killer? Look how happy he is!

We are so proud of Zander. This is a huge accomplishment and it could not have gone better. We probably won't have Zander and Kai at the same time - they are too instinctively attuned for hunting together - but one or the other will keep working with Dog#1 with the pigz.

Congratulations, Zander! What a good dog!

Posted by Ohiofarmgirl at 1:27 PM