I shared these pix on 'the facebook' last nite and just had to put them up here as well.  Dog#1 and Zander are the Team Hog. 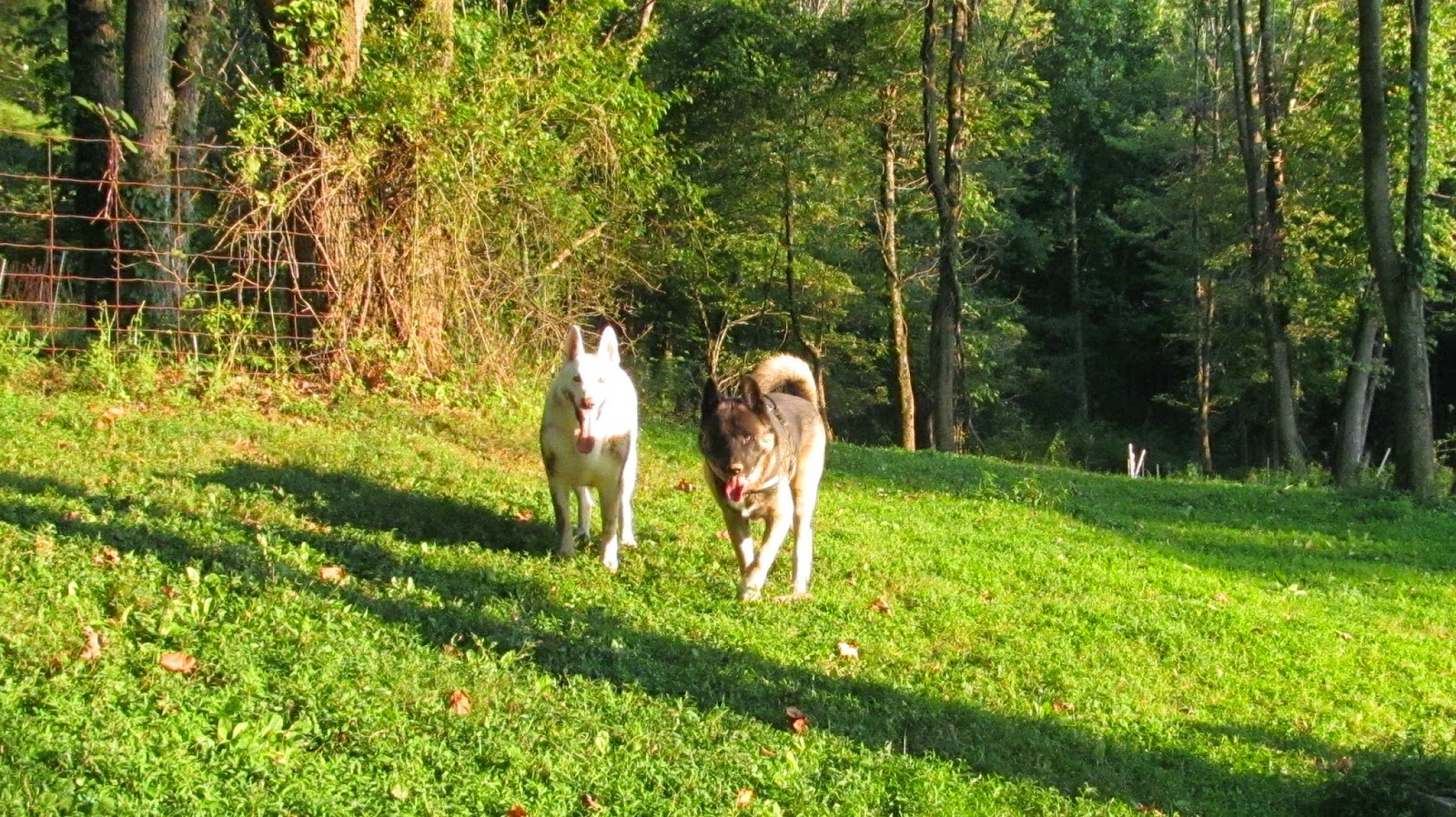 Last nite my Dog#1 got body slammed by a muddy hog during chores. Don't worry he was just fine - just a little muddy. But good thing we had The Dread Commander Zander as back up. 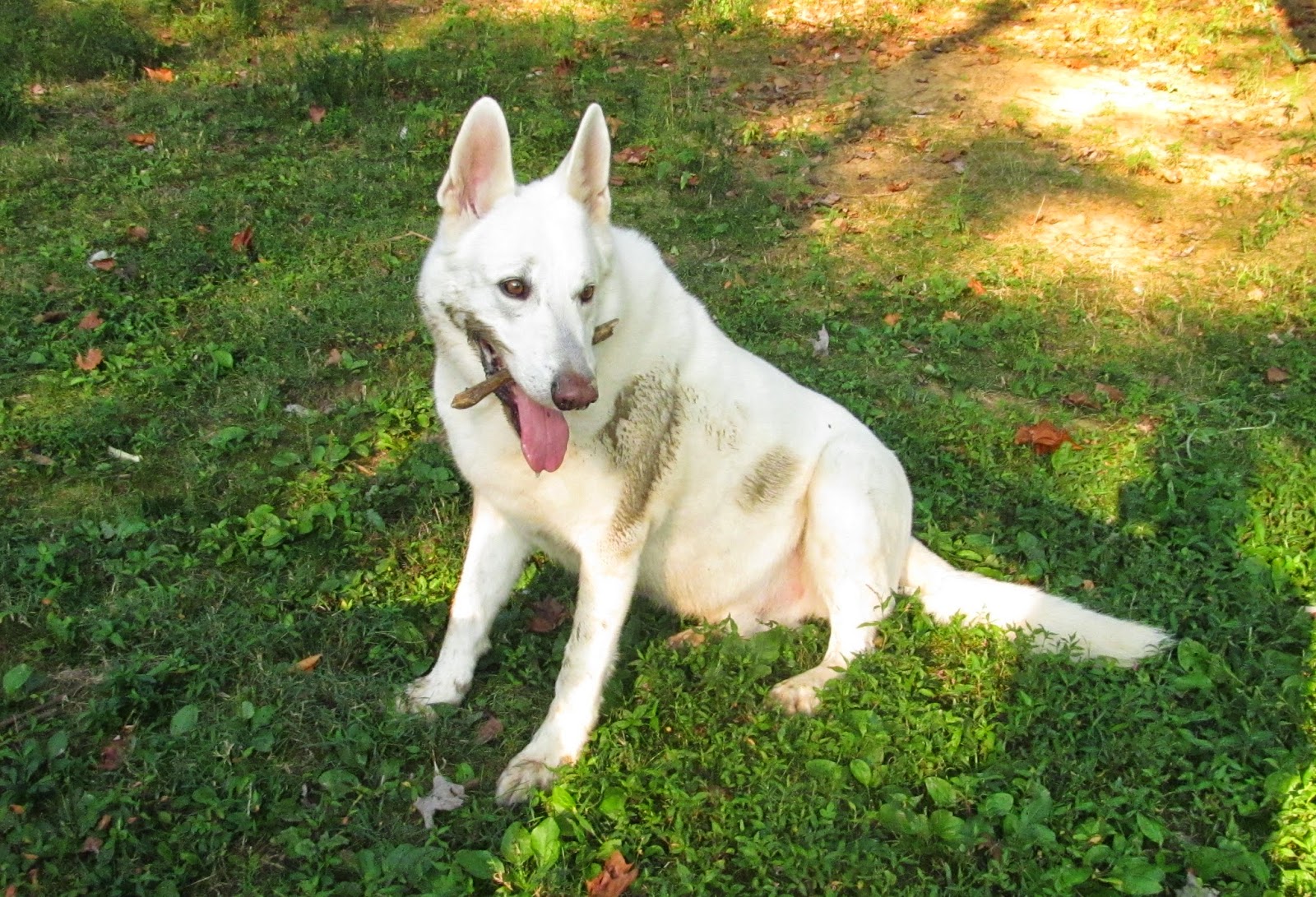 A little muddy and all he wanted was for me to throw the stick. We did.

Zander and Ti worked together to get the pigz moved back into the woods so we could easily get into their pen, dump their feed into their bowl, and then clean out the waterer without being swarmed or pushed down by pesky pigz. Team Hog held the pigz back so it was extremely easy to get these chores done quickly. "The Dread" Commander Zander. He will earn the name "Excellent" when we protects me from real danger.... like my Most Excellent Good Dog Titan has done many times.

Zander is doing great at his new job. He follows Ti's lead and he responds to some of our commands and is learning more.  The best thing is that his recall (when I call him back to me) is near perfect. Considering there is a lot of barking, running, and squealing pigz this is really amazing. He's also learning to watch me for instruction. I tell "Team Hog" where to move the pigz and also to come stop moving those pigz and come and get THIS pig. They both also immediately stop moving the pigz and come back to me or get out of the hog lot when instructed.

Someone asked me last nite if they really "herd" the pigz? Yep. This isn't two dogs just wildly running around barking and being out of control. They are intentionally working together to achieve a goal. Now, we probably couldn't take Zander to sheepdog trials or something like this..... but that's also not what we use our dogs for.

I also don't use standard sheep dog commands ("come by", "away") because I think there is some merit in using non-standard verbal commands. Some Military Working Dogs and police dogs are trained in Dutch or German so that their dogs are not distracted by other people goofing around when the dogs are working. I just use words that I normally use - but I use them consistently and in the same way to indicate what behaviors I want.

For instance, I needed a command to tell the dogs to move those pigz away from me and the gate. I couldn't use "move them back" because "back" is a specific command to tell the dogs to get behind me. We use this when I'm trying to work with the goats or the chickens. I might be moving the goats or chickens but I don't want them to run around wildly so the dogs are behind me and we move slowly. Or we use this if you show up unannounced. I will call the dogs to me and have them stand behind me while you get out of your car.

So now we use "move them out" to indicate the dogs should get all the pigz together and moving in one direction which is back towards the woods. The dogs stand in front of the pigz - between the pigz and me - and hold the pigz there. If the pigz make a run for it I say, "move them back" and the dogs lunge toward the pigz to hold them in place. Again, this isn't wildly running around and being out of control. This is specific targeted behaviors. 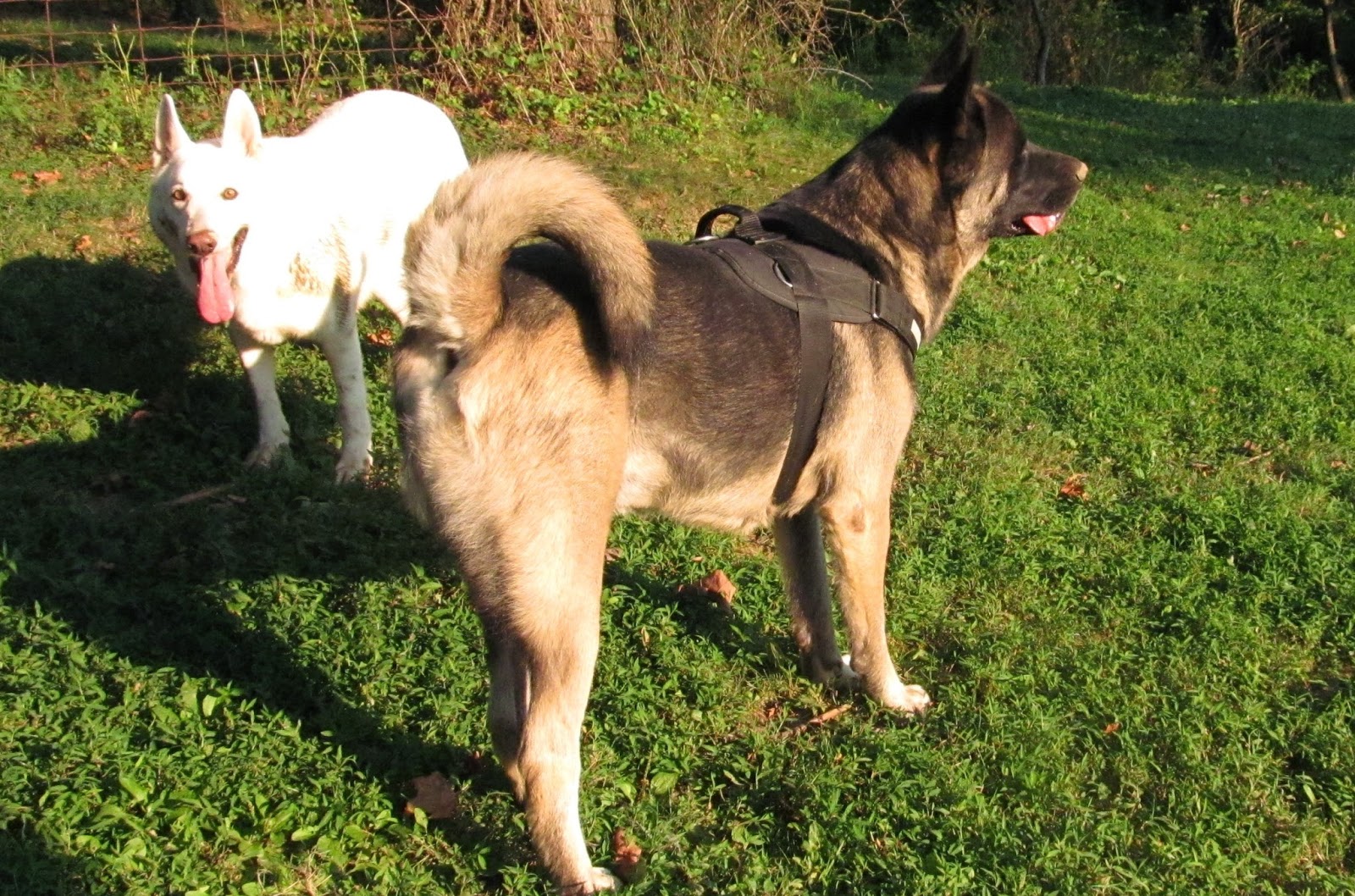 Once the chores are done then I call them to me and say "let's go." Then we all go out of the hog yard. Titan only ever wants me to throw the stick for him and Zander gets a lot of "good dogs!" and body rubs. We don't reward our dogs with food or treats. They value the work itself and being part of a team. Zander loves the work and gets excited when I say "let's go feed the pigz!"  He paws around by the door, grumbling and shaking his big head,  then thunders down the hill directly toward the pigz. He knows exactly what we are doing and loves it.

Unfortunately Titan was pretty muddy so we had to get him cleaned up. Bath? We don't need no stinkin' bath! I just washed him off with the hose.
#farmdogtough

Then we ran around some more, got a drink, and then I told them to "go watch the house." Which means I wanted them to both go up on the deck. They did. I gated them in while we did the rest of the chores and they could cool down.

Could we use Zander to round up the goats or herd the ducks? I don't think so. Maybe one day.... but his prey drive is really strong so we will probably just use him to work livestock that he can't easily pick up and shake to death.

Happy Tuesday everyone! Are you working your dogs?

Posted by Ohiofarmgirl at 8:01 AM

We have not specifically trained our two rottweillers because we don't have as much of a need as you do, but if I was in your situation, with so much farm work needing to be done by yourself, then I would definitely get them trained up. I think you have done marvelously well with your dog team!